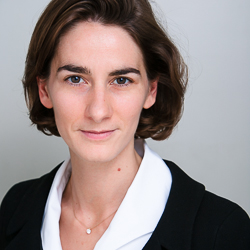 She has extensive experience in international relations and issues relating to European politics, culture and identity, and the relationship between Europe and the Asian emerging giants (China and India). She initiated several research projects on non-European views of Europe – Chinese and Indian Views of Europe – jointly with Chatham House in the United Kingdom and the Robert Schuman Foundation in France in 2006. Her other areas of interests are: France’s European strategy; European defence co-operation, in particular the Anglo-French Defence Treaty; Franco-German cooperation; European external affairs and cultural diplomacy and the significance of this for European integration. She is the author of numerous publications, and has been guest speaker and contributor to many conferences and media across Europe.

She was previously Consultant Manager in European and international business strategy and was awarded a special prize by the French Ministry for Culture in 2005 for her work on cultural patronage and the art. She is a Young Leader of the French-China Foundation.

The future of European soft power: A strategy for a European cultural diplomacy, LSE Ideas (2015)

Seminar and conference : A dialogue between China, India, Brazil and Europe, Amsterdam (May 2013), http://www.youtube.com/watch?v=QUhZCVroX3Q&feature=youtu.be and http://www.culturalfoundation.eu/content/dwarfing-europe-dialogue-between-brazil-india-china-and-europe-22-23-may-2013

Associate Director of the GPI Contributes to New Routledge Volume

Europe and the Belt and Road Initiative: State of Play and Contemporary Perceptions