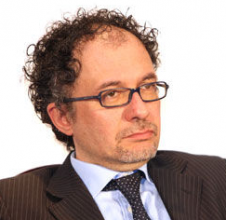 Michele Geraci is an international economist based in Shanghai. Previously, he was an investment banker between London and New York, and an electronic engineer.

Michele has been living in China for 10 years and is fluent in Mandarin. His economic analyses are practical and aimed at companies, investors and governments. Topics covered include monetary policies, income inequality, migratory flows and their socio-economic implications, urbanization, rural economy, the crisis of the Euro system, China-EU relations, the Silk Road and climate change, with the aim of identifying challenges and opportunities for Europe and Italy in particular.

Michele is regularly interviewed on these issues by international media and is a frequent guest on Chinese CCTV TV, as well as on the BBC, Al-Jazeera and, recently, also for RaiNews and Mediaset. He is an economic columnist for China Daily and Caixin – the two most widespread publications in China – and he writes regularly for Il Sole24Ore / Radiocor. He regularly attends conferences and teaches China’s finance and economy in Europe at the LUISS in Rome and the Copenhagen Business School in Denmark. Michele is also the author of a documentary on the rural economy in China and has recently launched a blog to disseminate topics of international economy and to increase the understanding of the China phenomenon.

In the last four years, Michele has been included in the list of the 50 most influential Italian experts on China by MilanoFinanza; among the top 5 experts on current political and economic issues at the University of Nottingham and has been awarded a Knighthood by Italian President of Republic for his work in the fields of finance and economics and promoting relationship between China and Italy

Before moving to China, Michele was an investment banker in the City of London. During more than a decade spent at the highest levels of international finance between London and Wall Street, Michele has worked in Europe, Latin America, Eastern Europe and Asia at the world’s leading investment banks, including Merrill Lynch, Bank of America, DLJ and Schroders. covering roles of high responsibility, prestige and visibility. He was among the first bankers to act as a consultant to governments in Eastern Europe, contributing to the economic development of these regions in the mid-1990s, completing the process of privatizing state-owned companies. As a financial analyst, Michele has for years served as co-director for Europe and director of Latin America for the Telecom sector, and was among the first analysts to anticipate the Telecom / internet bubble of 2000 and the crisis financial year 2007, events that have elevated the prestige, reliability and integrity of its analysis.

Before moving into high finance, Michele was hired as an electronic engineer, even before graduating, from British Telecom in London where he designed telecommunications satellites, used today for the transmission of television programs.

Interview with Michele Geraci on New Italian Government and Markets

GPI Head of China, Michele Geraci, calls for end to austerity in Italy

More or Less Europe? Liberalism of Protectionism? My Answer to Italian newspaper Op-Ed

France uses the China-Model and does better than Italy

Prodi in Beijing to talk OBOR