27 out of 28 EU ambassadors criticize the “New Silk Road” initiative (yi dai yi lu 一带 一路) because they believe it is a project aimed at opening new markets for China to reduce its overproduction. In other words, they rightly fear that China is going to compete directly with Europe in serving the countries covered by the Silk Road. The important note is that of the 28 EU countries, only Hungary has not signed the document in protest. Why?

China has adopted a policy of acquisitions in Europe that amounts to €260bn over the last 10 years, of which €179bn in the EU, but only 4.8% of this total were invested in the green-field, while the remaining €251bn were acquisitions of existing companies, thus, operations that did not lead to an increase in capital nor did they create jobs. De facto, a simple exchange between shareholders with few local positive spill-over. 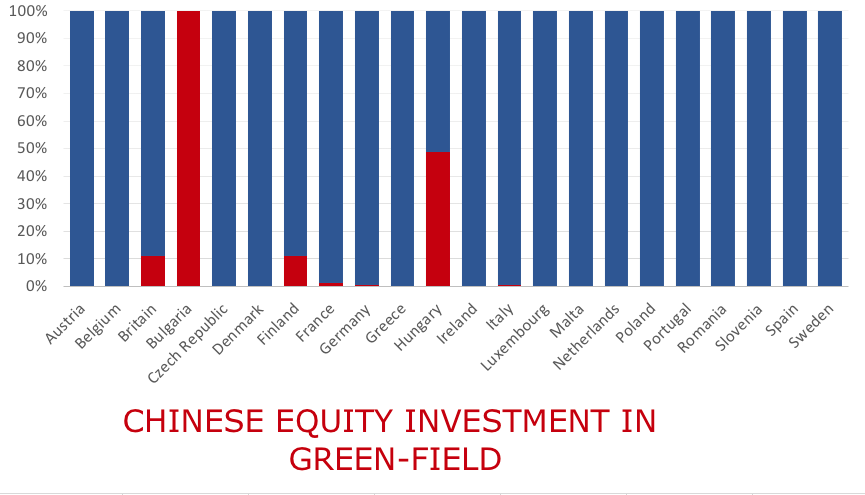 The only exception is Hungary, a country where I lived for a year working for Merrill Lynch and advising the local  Government for the privatization of the state company Matav, the Hungarian Telecom. Hungary is the EU country where, instead, Chinese investments have focused on green-field. About 50% of the investments made by China in Hungary has been in green-field (in Italy only about 1%, almost nothing) and concentrated in the Chemical (Wanhua) and Telecom (Huawei) sectors. It is clear that green-field investments bring true value to the country object of the acquisition, and it is clear that, in Europe. Hungary is the largest relative beneficiary of the Chinese investments. Therefore, it is not surprising that they do not make any statements that can irritate China. China has a cooperation program with 16 Eastern countries called 16 +1, but for some time now, there is a joke going around that  says that Hungary itself has moved on to the Chinese side, and the program is ironically called: 15 +2. Once again, this case demonstrates what, for some time now, I have been worrying about, that is China in pursuing its own interest uses the unity of the  European single market and it tries to penetrate it through the “weakest link,” the country that from time to time needs China the most. At First, they were the ports of Greece, now they are the industries of Hungary. Someone will remind me that the M&A policy, unlike the commercial policy, is not within the EU realm, but in the hands of individual countries. Still, both Juncker and I (VIDEOCAST) carry forward the idea of a mechanism for monitoring acquisitions of third countries to Europe. At present, every sovereign state is free whether or not to accept Direct Investments (FDI). This is, indeed, true. However, we shall beware of it! If a country, like Hungary, is free to accept Chinese investments in its territory, the goods produced in that country by Chinese companies will be, from then on “Made in the EU” and therefore, from that moment on, free to move without restrictions in all the other 27 countries. Hence, here it is the new Trojan horse: Budapest.

This article originally appeared on www.michelegeraci.com.