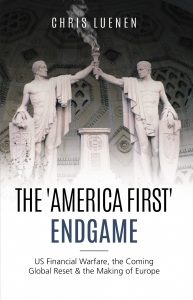 The ‘America First’ Endgame argues that we are currently witnessing the ‘endgame’ of the international system established by the USA in the immediate post-WWII period. It is against this background that the US has enacted a new monetary, fiscal, trade and foreign policy mix, ‘America First’, which amounts to a coherent and comprehensive financial war primarily directed against China, but also other economic competitors, in a last ditch attempt to position the USA for what comes next. The book explains the aims and rationale behind current US policies, places them into the broader context of a longstanding US grand strategy, and shows why they will soon trigger the next global financial crisis, which in turn will usher into a comprehensive global debt and currency reset, and a much more regionalised world political, economic and monetary system. While current developments bear significant risks for the European Union and its member states, they also present a unique historic opportunity for Europe to remake itself, and emerge as a clear winner in the new world that is fast emerging.

Some of the key issues and questions that The ‘America First’ Endgame examines include:

The book is available for purchase on AMAZON HERE.